Every time Ill Douche opens his pursed mouth, whether to speak, breathe or sound out letters, I can't help but ask, "What the fuck is wrong with this guy?" So I decided to do some research. Then I got comfortable, settled in for some armchair psychoanalysis and came up with the following conclusions: 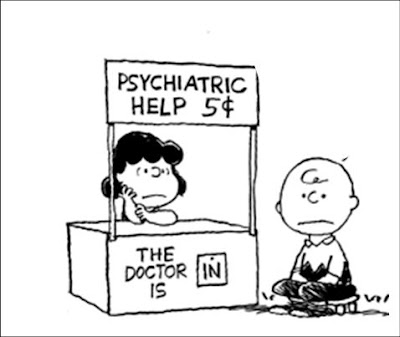 He is the Quintessential Baby Boomer

Baby Boomers are sometimes referred to as the "me" generation, and for many such individuals who were born between the end of the Second World War and the early 1960s (particularly those who were white, male and upper-class), it must have seemed as though they were inheriting a world made just for them. 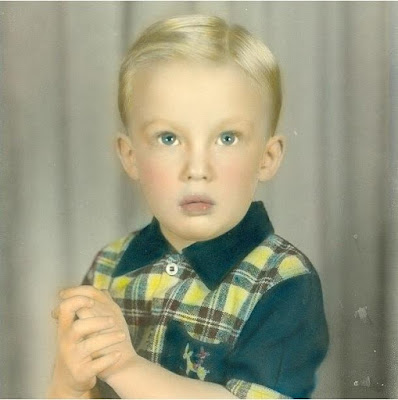 For many of these newly-minted citizens of the burgeoning American empire, it was all about getting theirs now. In fact, collectively, this generation's self-absorption and lack of foresight are a large part of why we have many of the problems that we currently face, including the looming threat of environmental and economic disaster. Never mind future generations or those who weren't born with the same advantages. What's in it for me right now? 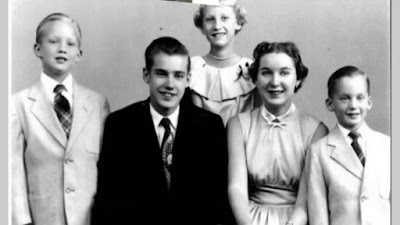 In 1946, little Donny Trump was born into a life of extreme privilege. He, his parents and four siblings lived in a 23-room house in Jamaica Estates, Queens. His father was worth an estimated $200 million at that time (about $2.7 billion adjusted for inflation) and the man was politically connected. To him, a million dollar loan really wasn't that big of a deal. Basically, Donny was an entitled little shit who grew up thinking that he could have anything that he wanted. It was just a matter of finding the right price.


You know how they say that hard work builds character? Well, this is a kid who never had to work a day in his life, and one could certainly make the case that even as an adult, he never really has. His idea of work is negotiating, which in his mind means being a dick to get what you want. This might also have something to do with why he's so insecure about his hands. You see, his underdeveloped appendages have likely never had to do any physical labor of any kind, and without his inheritance, Donald J. Trump would be just like any other ignorant racist with a Twitter account, except he might actually have to break a sweat in order to earn an income. I suspect that the mere thought of having to make a living with those tiny, incapable hands terrifies him. Tyrannosaurus Rexes probably felt the same way. In fact, now that I think about it, the name of that particular dinosaur literally translates to "tyrant king." Coincidence? Probably.


Either way, this man has never known anything outside of his own sense of entitlement and he has absolutely no ability to empathize with the lived experiences of most Americans, nor has he ever demonstrated any real desire to do so. At the same time, he wants ordinary Americans to love and adore him, while he couldn't give two shits about them, because that's how sociopaths roll. This man believes himself to be the center of the universe and will do whatever it takes to maintain that delusion. 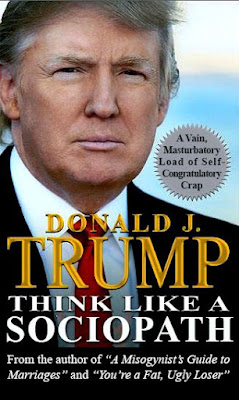 When Trump was 13, his dad kicked him out of the house and sent him to military academy because little Donny was acting like a total fuck-up. That's right, the idle threat that has been used as a plot device in movies ranging from Bill and Ted's Excellent Adventure to Diary of a Wimpy Kid actually happened to this guy. His biographer described it as "a profound rejection of Donald." Frankly, after looking at all these pictures of him, I'm also starting to feel a profound rejection of Donald, and it tastes a lot like my lunch. 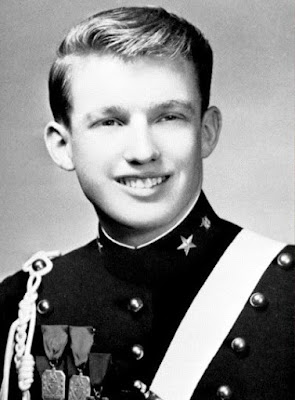 And what do you suppose happens to a kid whose own dad rejects him? Maybe he looks for anything he can find to boost his ego in order to fill this void. In this case, he becomes a narcissist who is obsessed with the idea of success and who constantly lies in order to get the attention that he so desperately desires. What? Too obvious? 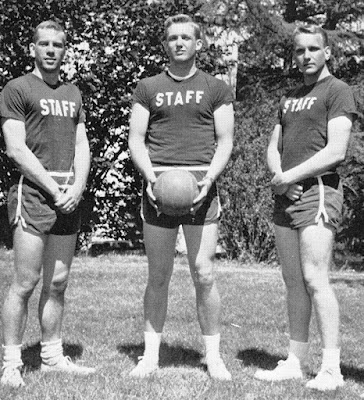 A former classmate said that Donald was probably the most manipulative person he had ever met. Another described him as "a loudmouth bully," and Trump's music teacher from elementary school said of him, "When that kid was 10... even then he was a little shit."

The Failure of Theatre Leads to the Theatre of Failure

In 1970, Donald's first business venture was in helping to fund a Broadway play called Paris is Out, a comedy about an old married couple named Daniel and Hortense who plan to go to Europe. However, the trip is cancelled after Daniel complains that he has no interest in "Paris, Venice, shopping, sightseeing or speaking in French." Meanwhile, Hortense quietly longs to see more of the world. 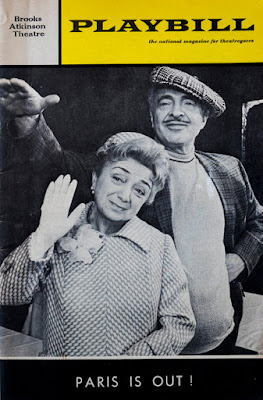 As suggested by the title, the play is not about them going to Europe. Rather, it is about a guy convincing the woman he married thirty years ago that they should remain nationalistically isolated and ignorant to other cultures for the benefit of their marriage. In other words, it is about a selfish man who strongly believes in American exceptionalism, but only because of his own myopic frame of reference, which leaves him blind to all other human achievements. 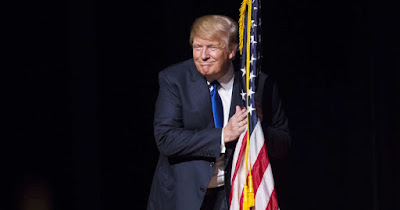 The play was a flop and Trump never produced another Broadway show again. One can't help but wonder what would have happened if the play had been a success. It also makes me wonder: where is Sam from Quantum Leap when you need him?


He is the Poster Child of Meaningless Celebrity

After his failure on Broadway, Trump turned his attention to the theatre of the absurd: spectacle for the sake of itself. Anything this man could do for attention, he almost certainly would. Whether that meant being interviewed on shock radio about his sex life, seeing his face in the tabloids, joining the cast of world wrestling, or hosting a "reality" tv show about a fake orange bag of douche who gets his kicks from firing people, there is nothing he wouldn't do in the name of self-promotion linked to the idea of success. He is famous for being rich and rich for being famous, a perfect postmodern loop. In fact, the Trump brand is really the only thing he has ever produced that is of any value... and even that he inherited.

Of course, my guess is that it's only a matter of time before people retire that last name altogether in the same way that you don't see a lot of kindergarten teachers today with the surname of Hitler or Stalin. Hell, I don't even like playing euchre anymore because of the goddamn trump cards.


He Believes Himself to be Superior to All Others

According to his biographer, Donald Trump really does believe himself to be a genius, someone who is genetically gifted in such ways as to make him objectively better than all other human beings. Trump is right, so everyone else must be wrong. This is the product of an extremely sheltered life. As suggested earlier, it is also the result of having one's ego destroyed as a teenager, then surrounding himself with sycophants, which led him to rebuild his ego as that of a sociopathic narcissist who convinced himself of his own greatness in order to dispel any reality that would seem to prove otherwise.


Normal rules are for normal people, but he sees himself as something better than that, which is why he also believes himself to be above tax codes and constitutional law. These things may apply to mere mortals, but not this guy. He is the most special snowflake of all. 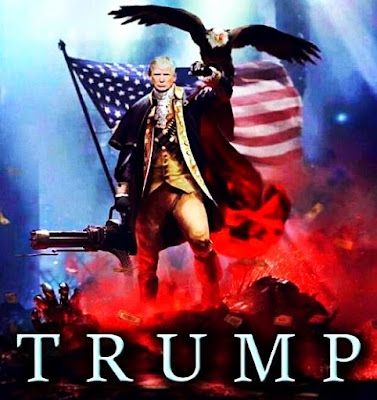 He Has No Friends

So it might seem strange that a man who thinks that he's god's gift to humanity wouldn't have any close friends, but even he admits this to be the case. For some reason, nobody wants to hang out with a rich, stupid asshole who thinks he's better than everybody else. Weird, right? 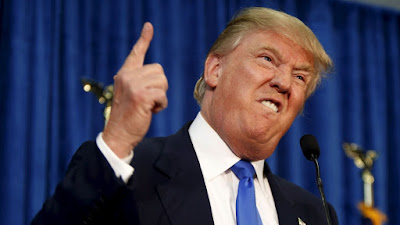 Friends keep us grounded. When we think about doing something stupid, it is our friends who offer perspective. Imagine living a whole life without anyone to tell you that what you are saying or doing is stupid. Instead, you've always been surrounded by business acquaintances, employees and yes men.

Donald Trump looks in the mirror every day at his Oompa-Loompa complexion, piss-colored hair, and botoxed expression of testosterone-fueled stupidity and says, "Yeah, you deserve to be President because you're better than everybody else, and anybody who says otherwise is a big fat stupid liar!" Meanwhile, there is nobody around to say, "Actually, that's kind of stupid. Maybe you shouldn't think that." 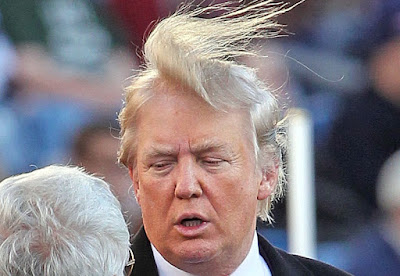 If I fake-tanned and wore a ridiculous hairpiece, I'm pretty sure that I could count on my friends to give me shit about it. You see, having friends is kind of its own system of checks and balances, and without them, we can make some pretty horrible decisions. 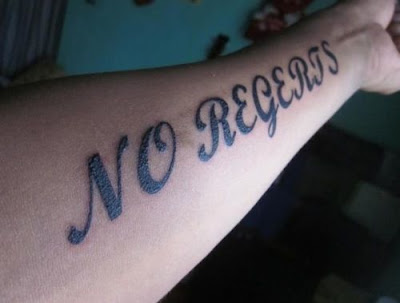 At this point, I think that even people who voted for him are starting to "regert" it.