If you've ever lived outside of the US, you know that most other countries don't really do breakfast cereal the way that we do. This is one thing that Americans truly do better than the rest of the world. While other countries may only have a few varieties to choose from, we have entire aisles in our supermarkets dedicated to this one item. 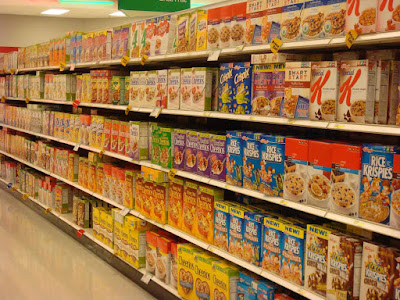 You can imagine how competitive the breakfast cereal industry has to be when you literally have fifty or more kinds to choose from at the grocery store. Much like twenty-four hour news channels or Tyler Perry's production company, the need to keep up with the constant demand for new product can result in some pretty misguided efforts. Here are some of the worst ideas that ever got the go-ahead from breakfast cereal executives:

In the first season of Family Matters, Urkel took over the show. Then he tried to take over breakfast tables across America.

The original boxes of the cereal described it as a "Fun, circle-shaped product." This, of course, could be referring to anything from a hula hoop to a steering wheel cover, which are two things that I also have no interest in eating. On the other hand, at least they don't taste like artificial banana and strawberry. I try to make it a general rule to not eat anything that might compel me to lick my armpits just to get the flavor out of my mouth.

By the way, here is the original commercial, because you know you want to watch it. And if you're wondering what Jaleel White is up to these days, maybe you could send him a letter.

Now with more sweat! Clearly meant to be a competitor to Mr. T Cereal and King Vitamin, I can imagine them all in a tag-team cage match together.

Be careful, though. Some of the more hardcore fans get pissed when you tell them that the vanilla flavoring is totally fake. 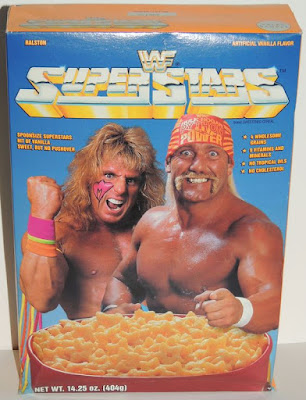 They had to take this product off the market when children everywhere were coming down with intense bouts of Hulkamania. Symptoms included speaking in grunts and an inexplicable propensity to wear bandanas.

Because who wouldn’t want a turd-shaped cereal that seems as though it was designed to taste like pencil shavings? Ever notice how in most grocery stores, the cereals aimed at kids are all stocked at their eye level? This is one industry that has always been pretty direct about shamelessly marketing their products to children. Not only do they want these kids to beg their parents for this crap, but in this case (and many others) they also purposefully misspell words on the box. That seems irresponsible to me, just because I have to believe that it only makes learning how to spell all the more confusing when corporations take artistic license with the goddamn language. Never mind how many kids went on to eat actual logs after this.

First of all, grins and smiles are pretty much the same thing, as are giggles and laughs. The terms are as redundant as me explaining it again in this sentence. 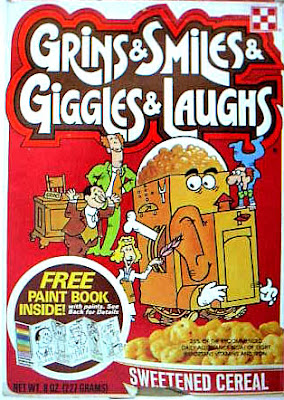 I assume that the pitch meeting for this product went something like this: “Fuck it. Let’s just go with all four of the names and get back to our crippling cocaine addictions.” Seriously, though, what the hell is that thing on the box? It appears to be some kind of mad scientist creation with cereal for a brain and ears for a nose. If the packaging is any indication, I assume that this crazy contraption was designed to turn children's laughter into yellow pellets of styrofoam insulation.

If you're not confused yet, watch the commercial.

This one’s kind of crazy if you trace the lineage. 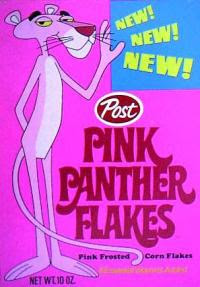 First, The Pink Panther was a 1963 comedy starring Peter Sellers. The movie is about a diamond heist, and the name of the gem that the characters are all after is the "pink panther." In the opening credits, as was relatively common at the time, there was an extended animated sequence that gave the audience the opportunity to buy some concessions and find their seats. In this movie, the animators chose to take the name of the movie literally and drew an actual pink cat outsmarting the always-foolish Inspector Clouseau to the tune of a certain Henry Mancini song. These same animated characters were then featured in a television show of their own in the seventies. It aired for a few seasons, and then it was resurrected in the eighties, at which point somebody thought that it would also make a good "pink-flavored" breakfast cereal. Because the eighties was full of great ideas...

Again with the purposeful misspelling. The word is Crinkles, damn it! This one also featured a racially insensitive stereotype named So-Hi, which I think you would have to be in order to consume this. How high? So-Hi... I don't recommend ever attempting to eat breakfast cereal with chopsticks, either. Besides, the milk in that picture is clearly white glue. Don't do it, So-Hi! It's an imperialist trap! They just want to steal your resources! 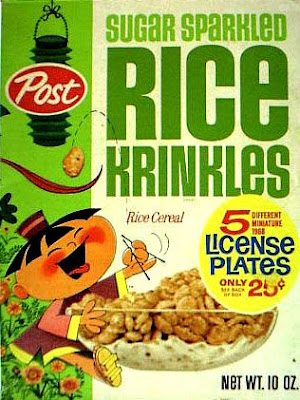 This product came out in 1985, years before any OJ Simpson/cereal killer jokes would have made any sense.

If you're wondering if this was any good, go pour yourself a bowl of Kix cereal with some milk, then dump a glass of orange juice into it. Sounds terrible, right? Rather than pour a new bowl, some breakfast cereal executive decided to just run with it. 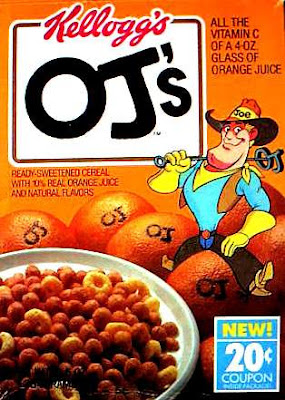 Kids would probably never make fun of a cereal product with the word “balls” right there in the name, right? Dunk-a-balls… No, that doesn’t even sound vaguely dirty. 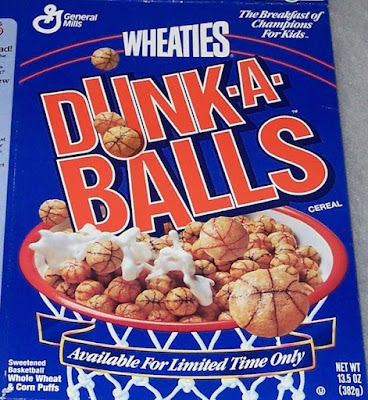 Much like the product itself, I'm guessing that whichever executive suggested the tagline of "Dunk your balls in it!" was also only available for a limited time after that.